Plazma Burst 2 is an awesome side scrolling shooting game created by Eric Gurth, in which you move your avatar with standard WASD keys and aim and shoot with your mouse. The new thing compared to Plazma 1 is that you can use the X key to fall graciously, which is useful when you want to dodge shots or fly across long holes or even to escape very small rooms.

You play as a space man sent to an alien planet where you destroy aliens and other humans. Well, actually you are a Marine sent trough the portal to the present time where you fight Civil Security to reach yet another portal and activate it. The main protagonist include you, The marine, Proxy, playable halfway through the game, and Noir Lime, a slow guy with huge health carrying a Minigun C-02.

The antagonists are the Civil Security, your main threat, Usurpations which replace the Falkoks from Plazma 1 (they are the aliens), and the Androids, the robots that seem like humans, but use alien Shot Guns. Other than the Minigun, there is a huge array of weapons to choose from, like the starting double swords which are really fun, but of course have a small range, there are 2 Pistols, Shotguns, Assault Rifles, Rocket Launchers, Ray Guns, Plasma Guns, Grenades and some more, which you will encounter when you play the game.

What I love about this game is its feel while you move and shoot. I love it because it feels natural and unhindered. When you jump, you can grab onto cliffs and climb on higher grounds. These, along with the huge weapon selection, make the game addictive, with the “just 5 more minutes” syndrome ever so present. And of course, the best of all is – the multiplayer. Well, I will not spoil this for you, play the game and find out for yourself! Overall, Plazma Burst 2  is a highly recommended shooter game. 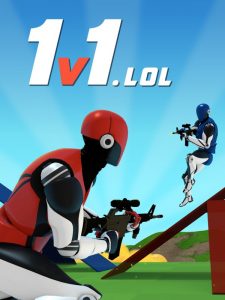 1v1.lol is a competitive online third-person-shooter where you build your way around the map tactically. You can build platforms, ramps, and walls to aid your defenses and gain an advantage. The main game mode is 1v1 battle royale, where the winner is the last player standing.